Calm and atmospheric appeal thanks to individual accents on the rear side of the nursery in Lemwerder.

Modern and attractive design of the façade of a new nursery building in Lemwerder.

The ÖPP project involving the turnkey new nursery building in Lemwerder also included the planning, construction and interim financing of the building including and also work on the outdoor area. The end result is a harmonious mix of modern architecture, functionality and a warm-hearted atmosphere. 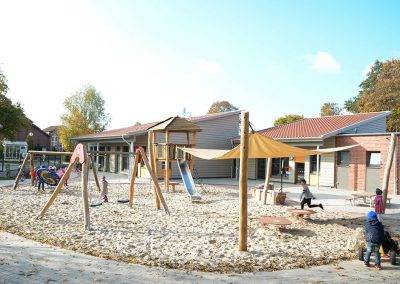 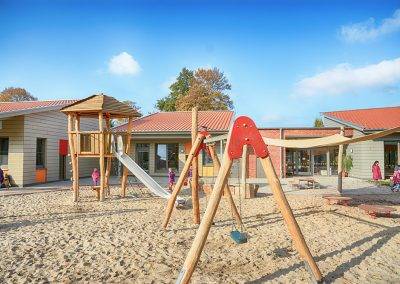 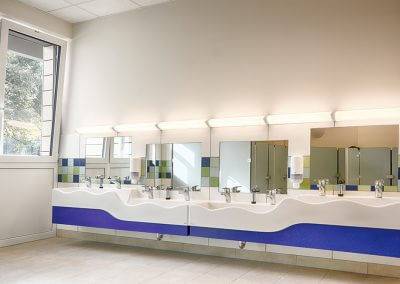 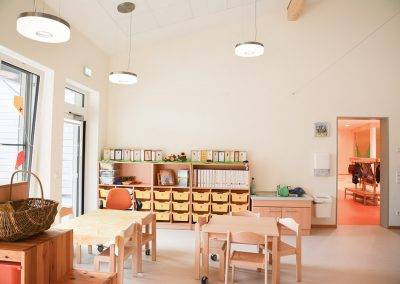 There are lots of nurseries, however none of these facilities should be seen from a purely functional point of view. The focus of the planning and realisation work was to take into account the character of the facility and its history and the natural surroundings. This allows harmonious buildings to be created that combine functionality and individualism as proven by the new nursery building in Lemwerder. 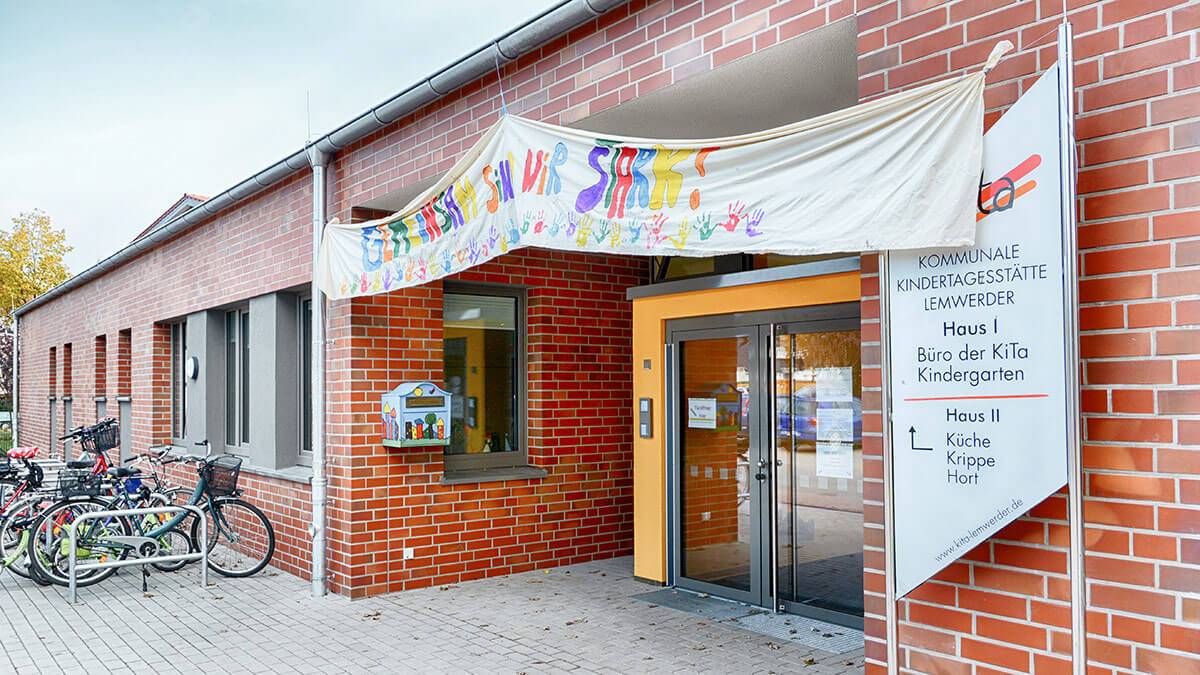 The objective of the new nursery building in Lemwerder was to integrate it into the existing surroundings, but also to give it a versatile design that reflects its use.

On the one hand materials, like the facing bricks and roof coverings on the sloping roofs, reflected the nearby surroundings, on the other hand new materials like fibrated cement façades and colourful plaster surfaces create a varied and lively outer appearance. In this way, the new building merges into its surroundings and also outwardly conveys the vitality inside.

The façades of the building, which has a flat sloped roof, are made of a thermal insulation system with brick tiles. A red-brown stone with a light play of colour and grey grouting was proposed.
The group rooms and a multi-purpose room are designed as four single buildings facing the open space to the south and have a hanging fibrated cement façade. The 19 cm high panels were installed horizontally to create a linear façade structure. To differentiate and visualise the various functions, the façades of the group rooms were rendered with yellow-beige fibrated cement, whilst the façade of the movement room was rendered in grey beige fibrated cement. The grouting is an anthracite colour.
The façade of the main entrance and the two façade surfaces behind the cafeteria and the play island that face the street are rendered in bright colours. The mix of yellow, orange and red tones with the brick tiles and fibrated cement façades creates a harmonious range of colour.

The windows and window doors are made of plastic. All elements are an anthracite grey colour because the materials and colours described above offer enough colour to the building. Aluminium window sills were proposed to match the colour of the window elements to form a closed unit. All outside doors have the same colour but were made of light metal elements.

The flat sloping roofs are sealed with bitumen, although this is not visible due to the low roof pitch. The sloping mono-pitch roofs above the group rooms and multipurpose room are visible. They have red coloured tiles that correspond to the colour of the brick tiles and fibrated cement façades. All roofs also have gutters, downpipes and standpipes made of titanium zinc.

With the Lemwerder nursery we have created an extremely attractive and, at the same time, subtle landmark in Lemwerder.

The building and the outdoor areas are ideally suited for the needs of the team and the children. After the fire in 2014 it was important for us to create a place of new beginnings without compromising the building’s original charm. Now the entire complex effuses warmth, joy and life.